In the first blog post we determined the “swing counties” in BiH, now we continue with our election result analysis. This time we are going to be looking into answering two questions:

With a simple change in the algorithm used last time we can answer these questions. We only have to add a conditional statement to ‘mark down if there were not changes in favourite party between 2006 and 2014’, and ‘If changes occured, note from which to which party they were’.

This provides us with new tables with interesting data. The first one is a sorted table which tells us how the votes moved, that is how the voters changed their favourites from party to party. 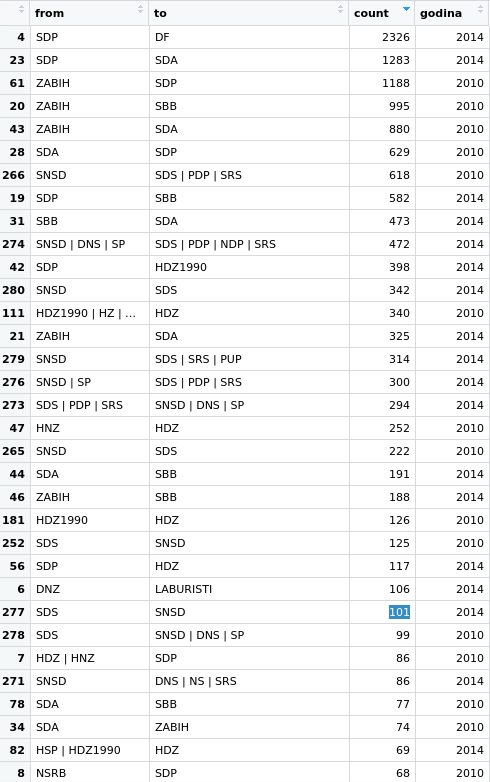 The ‘count’ column tracks how many times a change occured for each level at each polling position, so a polling station in the Republic of Srpska (one of the two entities within the Republic of BiH) votes for 4 different governmental levels, giving us a maximum of 4 changes. As you can see from the table the SDP fell to pieces in 2014. The fact that DF, a party created by former SDP members, would pick up most of their former voters was obvious, however the transition from the socialdemocrat SDP to the conservative SDA was less noticable to the general public, despite being the #2 destination of former SDP voters.

The only comparable political event is the disintegration of the ZaBiH party in 2010 which never managed to recover from that. I leave all further analyses to people better versed in Bosnian political history. 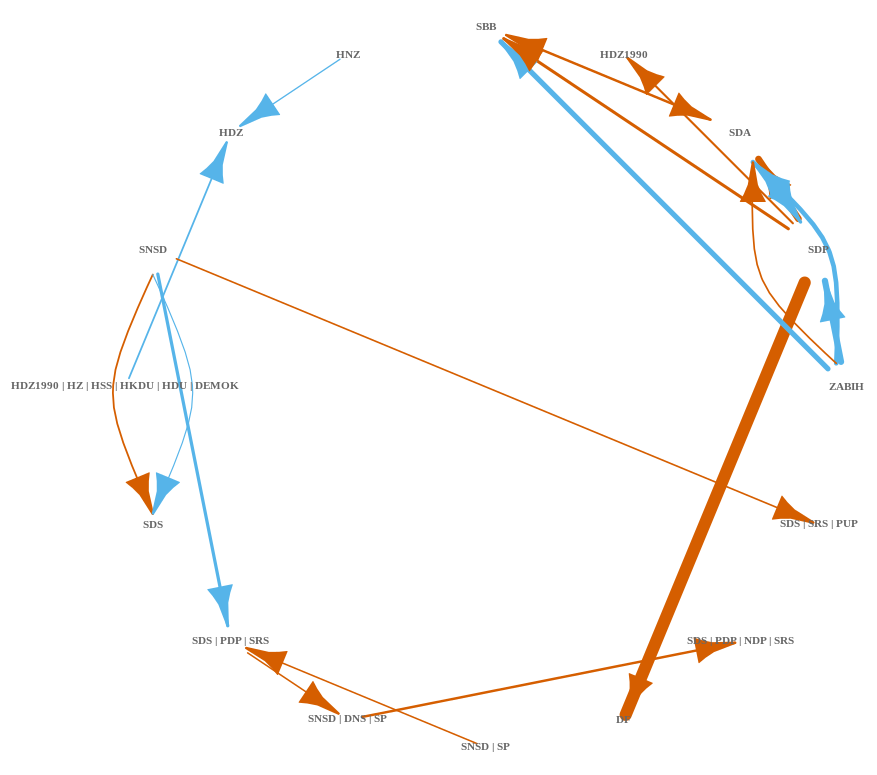 Something that seemed doable was to make a small network graph to show the interaction between parties, where we could visualize the ‘flow’ of favourite change. The blue is for 2010, orange for 2014. The thickness of the line connecting two parties is dependent on the number of ‘transitions’ of polling stations. There we can see another obvious thing, that most of the transitions occured between SBB (centrist) - SDA (conservative) - SDP (social democrat) - DF (liberal), while the number of connections between Serb and Croat nationalist parties is much lower. I only used the top 20 rows of the previous table to make this, using any more would have only given us an uninformative ball of yarn, as the number of transitions between other parties is effectively negligable.

The next thing I was interested in was which parties have the most loyal constituents. We followed this in the algorithm obtaining this table. 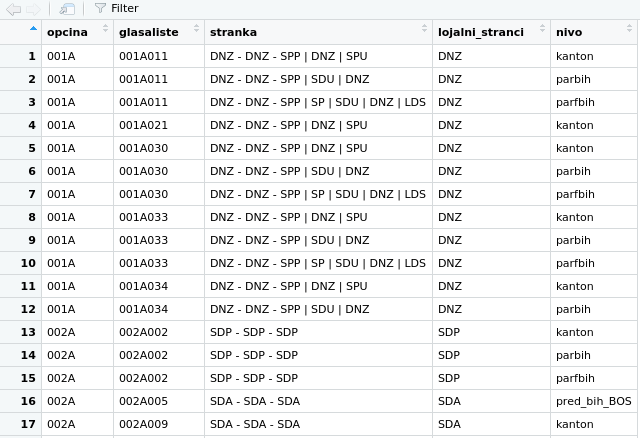 If we count the ‘loyal_to_party’ (‘lojalni_stranci’) column we get the following table.

Here we can see that the nationalist parties SNSD, SDA and HDZ have by far the most loyal constituents. Once again, not surprising. One thing that seemed insteresting to me was the column ‘nivo’, indicating the governmental level being voted for. Notice how SNSD voters are loyal to SNSD candidates on all levels, however a bit less for their presidential candidate. Similar effects are seen for SDA, while it is completely reversed for HDZ, whose voters are most likely to vote for an HDZ candidate for the Presidency of BiH, but opt for other parties for the lower levels of government.